What is a General Election?
A General Election, which occurs every November, is an election where all voters, regardless of political party (or lack thereof) can vote for any candidate they choose. The candidate(s) with the most votes in the General Election is the winner of that race and will take office beginning in 2023.

Simply put, a voter will be presented with all candidates (Democrat, Republican, or Nonpartisan) to vote on in a General Election.
What is on the November 8, 2022 General Election ballot?

The following offices will be on the November 8, 2022 General Election ballot:

State Board of Education

Who are the candidates on the ballot?

You can see a list of ALL candidates for the November 8, 2022 General Election at the top of our Candidates page. To see the candidates that will appear on YOUR ballot, use one of the following tools:

What deadlines should I be aware of?

Full list of deadlines for the November 8th 2022 Election

What Districts do I live in?

Districts for the Ohio House and the Ohio Senate have been changed for the year 2022. Maps that were passed by the Ohio Redistricting Commission on Feb. 24, 2022, are in effect for this year (new district maps will be drawn for elections in 2024). The simplest way to determine what district you live in is to use the Get Your Voting Information tool. A list of every district you live in can be found here. A sample of these districts is shown below: 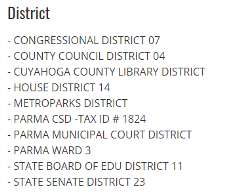 If you are interested in the physical boundaries of any district map in Cuyahoga County, visit our Maps and Data page to view interactive maps.

What are the final district maps and how long are they effective?

The Ohio Redistricting Commission is tasked with redrawing the district boundaries for both the Ohio House and Senate, as well as the U.S. Congressional districts in Ohio. This decade marks the first time the newly configured Ohio Redistricting Commission redrew the districts using criteria from an Ohio Constitutional Amendment that was passed by voters in 2015 (Issue 1).

The Ohio Redistricting Commission is comprised of seven members:

To keep it simple, the Ohio Redistricting Commission, using new census data every 10 years, is to redraw district maps based on a set of criteria detailed in the 2015 Constitutional Amendment. To pass a redistricting plan, at least two members of each major political party must agree to the plan. If not, then any plan that is passed will only last four years.

Without getting into the details, due to legal challenges and rulings by both the Ohio Supreme Court and a Federal District Court, district maps for the Ohio House and Senate, along with the U.S. Congressional districts, are only effective for 2022 elections.

What is redistricting and why did Ohio change district maps in 2022?

What is redistricting and why did Ohio change district maps in 2022?

Redistricting is the process of enacting new congressional and state legislative boundaries. As required by the U.S. Constitution, this is done every 10 years following new census data. The most recent census was conducted in 2020, with the results of this population study released on August 12, 2021. It was this data that served to guide the redistricting process in Ohio that led to the district maps we are voting on in 2022.

Based upon the census data, Ohio’s overall population decreased relative to the rest of the United States, resulting in the number of U.S. Congressional districts in our state dropping from 16 to 15.
What is the mailing I received from the Ohio Secretary of State?

To ensure fairness and uniformity across all Ohio counties and reduce lines at polling locations on Election Day, the Secretary of State will mail an absentee ballot application to every registered voter in the state. The application will be pre-filled with the voter’s name and current address. To receive an absentee ballot (or Vote-by-Mail ballot) the voter must complete the application by providing a date of birth, a form of identification, and signature before using the provided reply envelope and returning it to the Cuyahoga County Board of Elections.

Applications will be mailed during the first two weeks of September. You are welcome to request an absentee ballot application using the form provided on our website at any time, however, the application from the Secretary of State is sufficient to receive your Vote-by-Mail ballot for the November 8, 2022 General Election.

Video:  Absentee Ballot Request Forms
(this video is from 2020, but the message and process are the exact same in 2022) 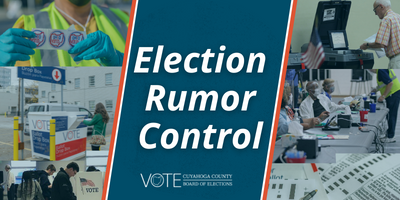 How could we make it better?
Please leave a comment before submitting.
Thank you for your feedback
Your feedback means a lot to us. We use it to improve the experience of all of our users.
If you would like to contact our staff, please email us at electioninfo@cuyahogacounty.gov.
go to top